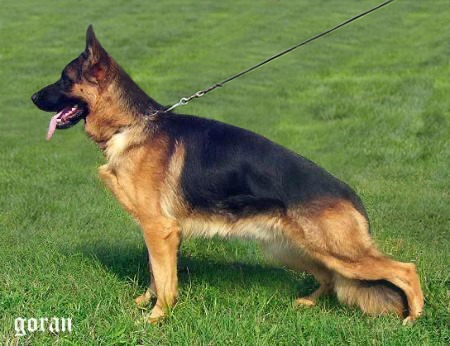 SG1 Arek D’Ulmental – rated by German judges in Germany, stud is retired at this time.

Italian born at the famous D’Ulmental kennel and imported to our Romanian kennel. Sire of Arek is Vadim, Vadim is Vegas’s full brother. Fully titled parents and grandparents SchH’s (schutzhund) with Kkl I (recommended to breed) and excellent hips and elbows. Very healthy bloodlines. WORLD CHAMPIONs in his pedigree. FULLY TITLED – IPO1 / SCHH2 / KKL1 / A1 / A1 / SG1 / SG – !!! 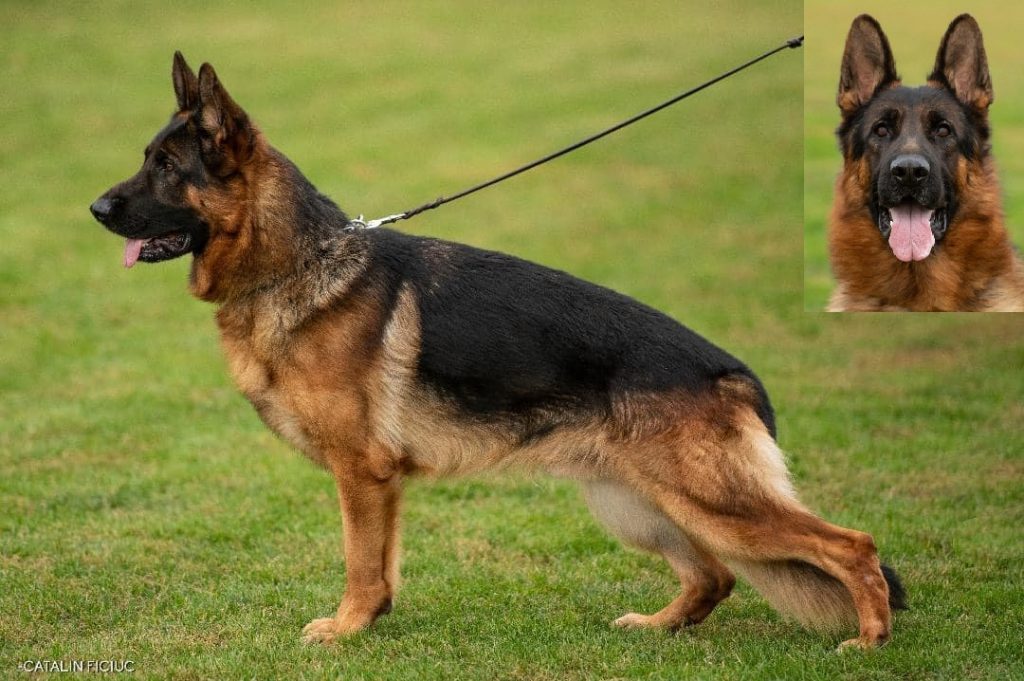 German born and imported to the USA.

Odin is also certified by the OFA (Orthopedic Foundation of Animals) for Degenerative myelopathy for clear genes, he doesn’t carry the disease.

Fully titled parents and grandparents SchH’s (schutzhund) with Kkl I (recommended to breed) and excellent hips and elbows. Very healthy bloodlines. WORLD CHAMPIONs in his pedigree. 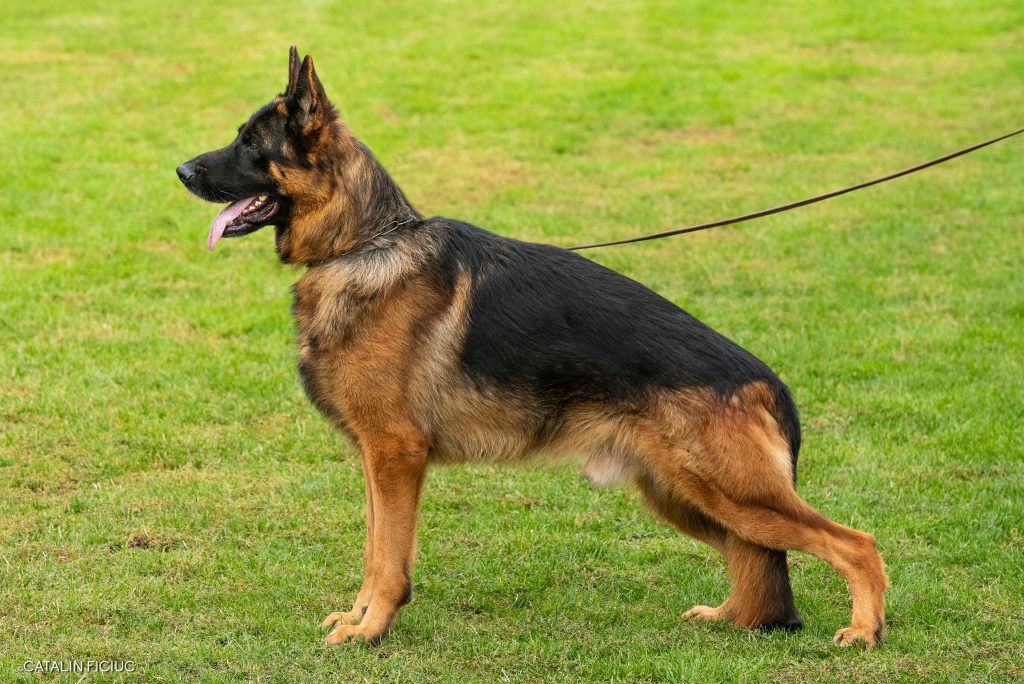 V1 Remo in Regnum Marianum – Rated by German judges at the Romanian Sieger Show.
Good stud, phenomenal movement, Strong pigment and colors.
Fully titled, have been shown to a lot of competitions in Eastern Europe.
Hips noch zugelassen (still permitted) by S.V. and normal elbows, DNA tested.
Located in our European kennel, if interested he is for SALE and can easily be imported. Fair priced!!! 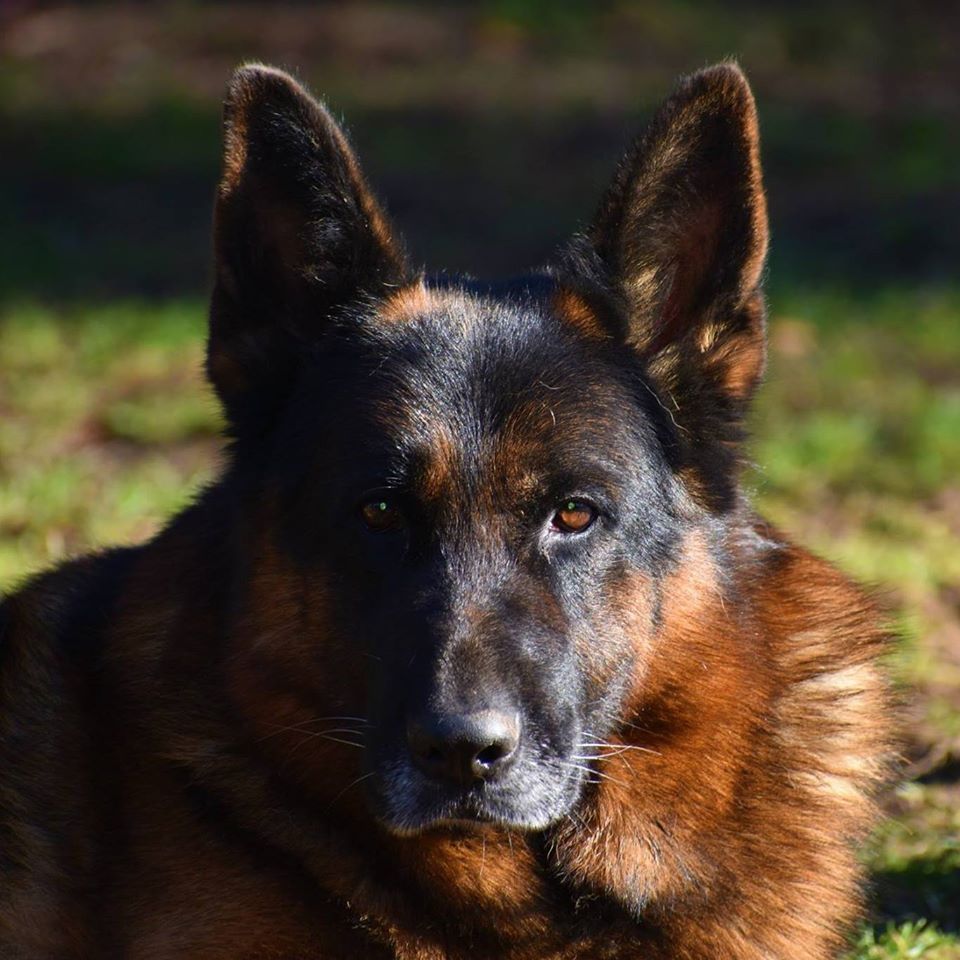 Figo is imported and he is an average male. His biggest trait is, his extremely dark and red pigment.

Figo is an older stud we have in our Tx kennel, very very social, very good with children and any other animals. He has a medium-high drive and he is getting anxious if he will be a in a kennel and not by your side all day long.

Figo had his hips and elbows tested and rated in Germany with EXCELLENT.

Degenerative myelopathy certified by Orthopedic Foundation of Animals with CLEAR. 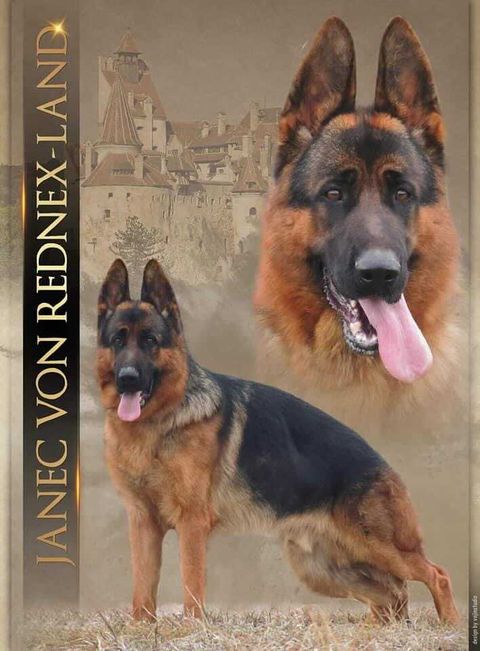 SG Janek von Rednex Land – Rated in Germany by the S.V. judges. Stud was bred and born in Europe, imported for our Tx kennel.

He is 66 cm at the shoulder blades, which makes him at the limit of still being accepted in the German competition. He weighs around 90-95 lbs.

He loves to work on the bite sleeve. His temperament is attentive and sound, social.

Fully titled parents and grandparents SchH’s (schutzhund) with Kkl I (recommended to breed) and excellent hips and elbows. Very healthy bloodlines. WORLD CHAMPIONs in his pedigree.

He was cleared in Germany for Degenerative myelopathy and there is a certificate to prove it. 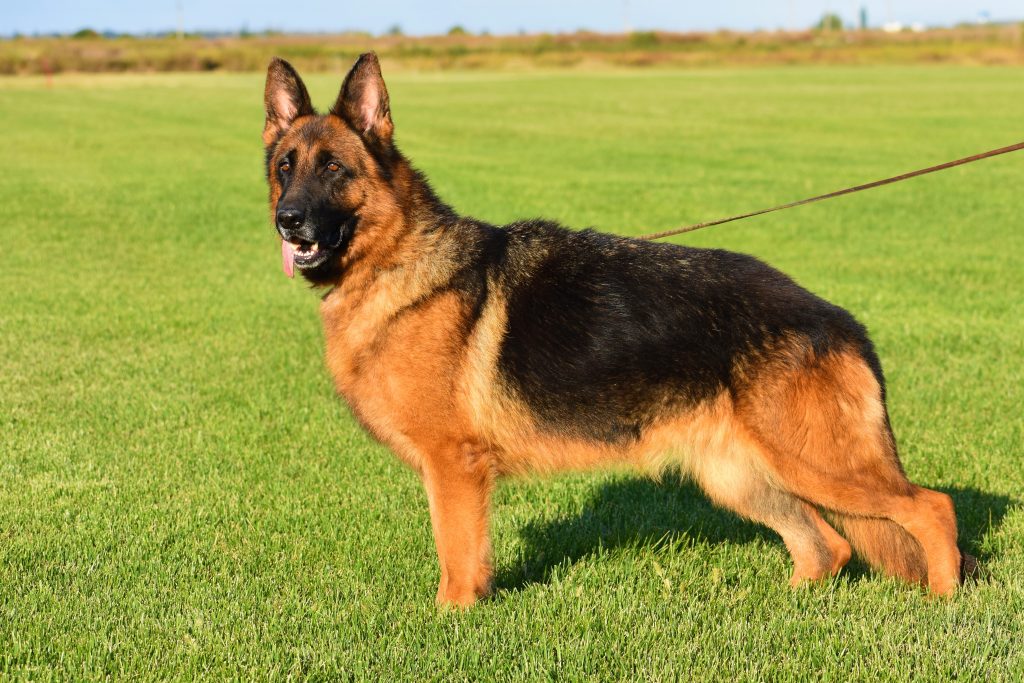 She was bred in our kennel in 2011 from Arek D’ Ulmental’s bloodline, the most gentle female you’ve ever met, very caring for her pups and not only, she would literally nurse and take care of any puppy,
her hips were normal certified by FCI back in the day, Elbows rated normal by OFA, Degenerative myelopathy carrier, one genes carries the genetic issue, this dogs are recommended to be bred only with DM clear males and there is a chance for them to have symptoms later in life (which she doesn’t), she is the dam of Gina (certified by OFA for DM with CLEAR). 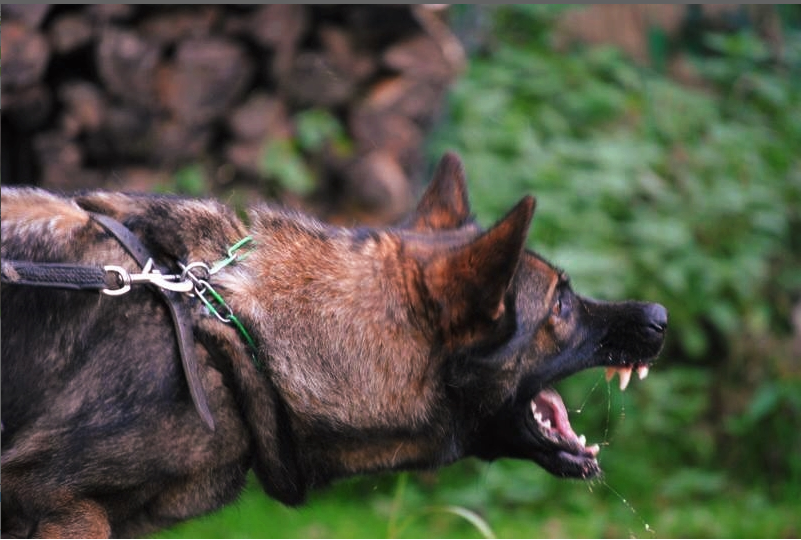 SG Nala vom King’s Castle – German born, raised and titled in Germany. Imported to our kennel, Nala is a typical working line german shepherd, she is high drive and has a ready to please attitude.

Standard size female, 29 kg and 58cm.
Excellent hips and elbows rated and certified by the Germans, Lebenszeit (recommended to breed) titled in Germany. She definitely brings quality to the german shepherd breed.

Nala can easily run 40 yards in 4 seconds… want to try your luck? 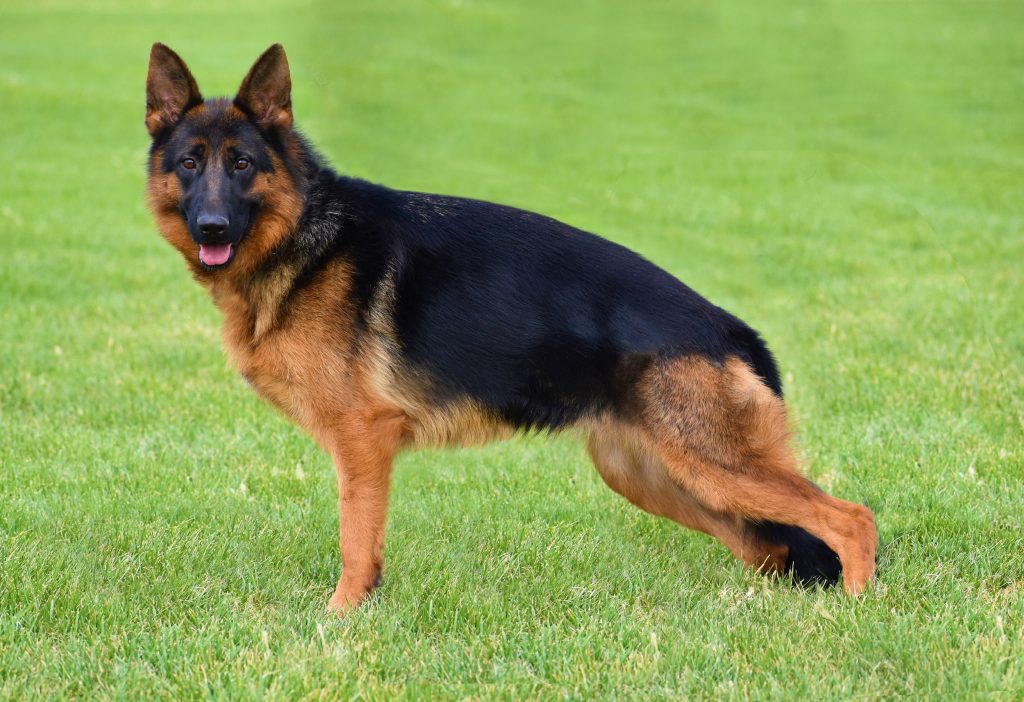 Pegy is imported from our European kennel, born and raised on our big ranch in Romania near Bucharest.

She is one of the 3 full sisters we have in Texas.

Her size is average, 58 cm at the shoulder blades, very good movement. Very good results at the conformation shows.

Pegy has a calm temperament and has a medium drive, if she doesn’t know you before you visit us, don’t expect her to come over and lick your hand, that’s not her character. In spite of that, she is very attentive and has a sound temperament. Pegy is tested and certified for hips and elbows in Germany by S.V., hips and elbows are rated as excellent.

She is also certified by the OFA (Orthopedic Foundation of Animals) for Degenerative myelopathy with CLEAR genes, she doesn’t carry the disease. 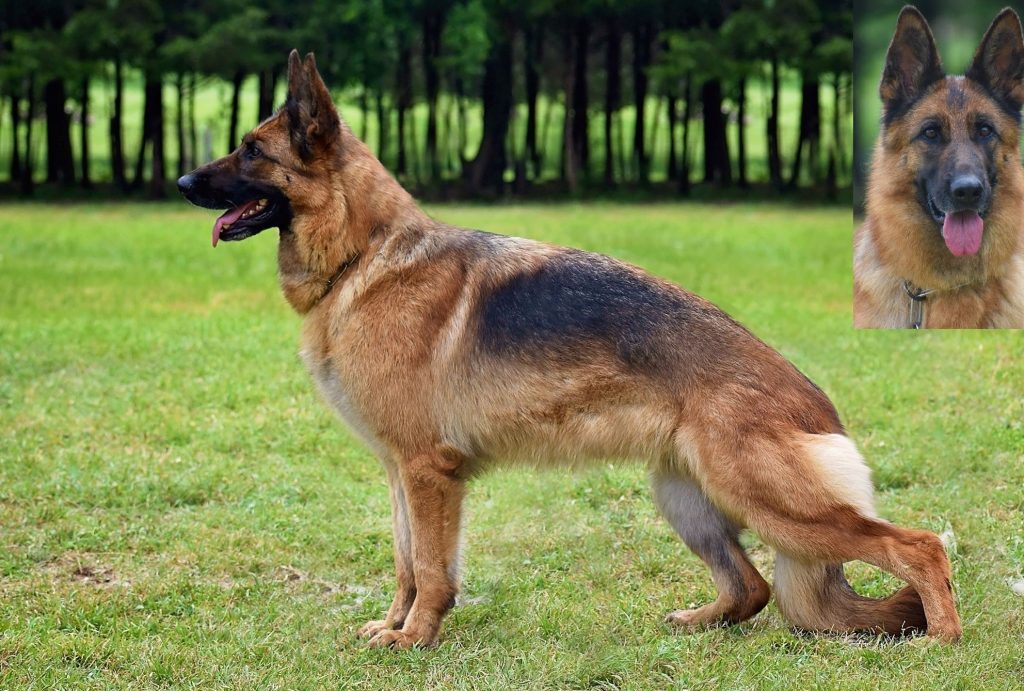 SG Rita vom Messina. German bred and born. Imported to our Tx kennel, Rita before importing, have been shown in German competitions. Hips and elbows dysplasia certified by SV in Germany with NORMAL. Degenerative Myelopathy CLEAR by the Germans.

She is a tall female, 61 cm at the shoulder blades, lean and very good conformation for showing. Ready to play and please attitude. Sound and attentive temperament, very social.

She is a tall female, 61 cm at the shoulder blades, lean and very good conformation for showing.
Ready to play and please attitude. Sound and attentive temperament, very social. 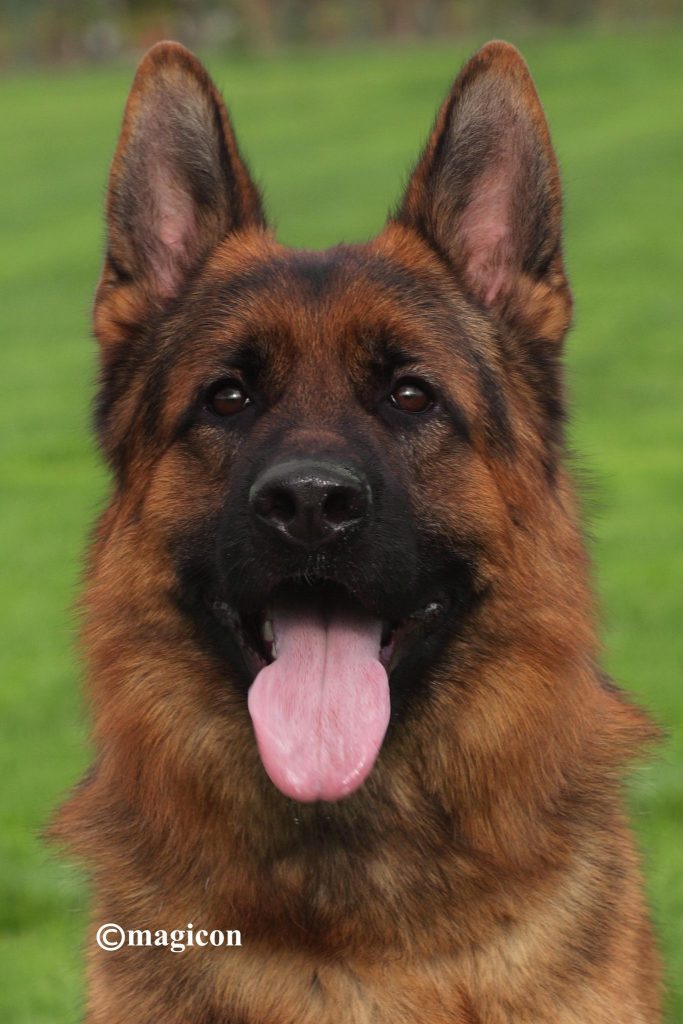 Iliano is a German import that achieved success at the young class in 2019 at the German Sieger show SG12, he is also V rated.

He is a big stud a little out of the standard, with 67cm at the shoulder blades, and 100 lbs. Very social, ready to please attitude, loves the ball, medium drive.

He had his hips and elbows certified in Germany with NORMAL, DM also cleared in Germany before being imported to the USA. 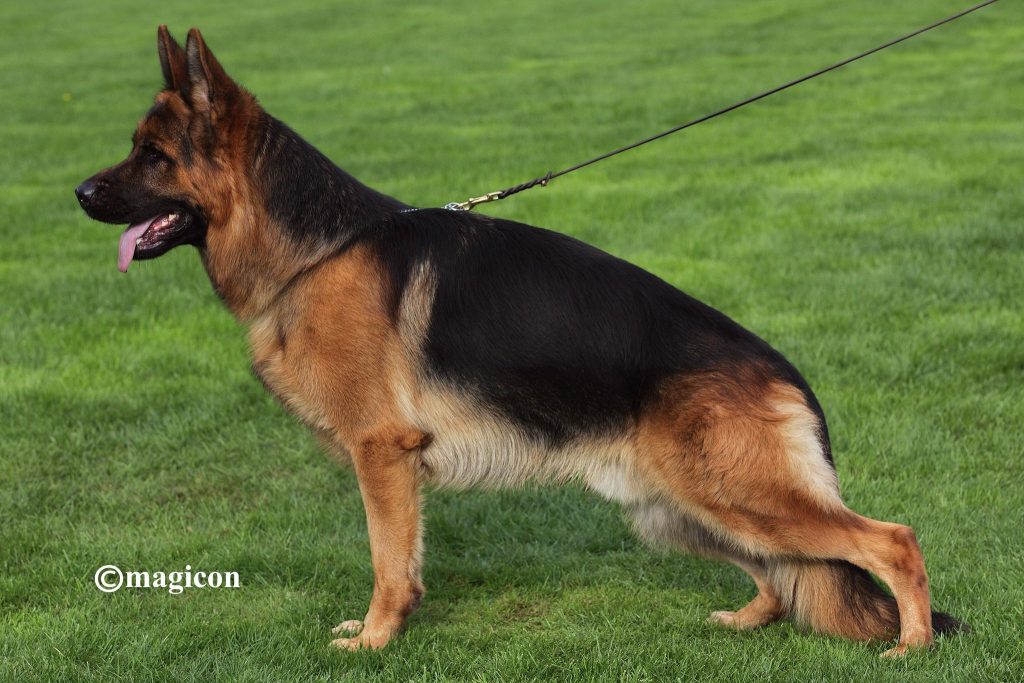 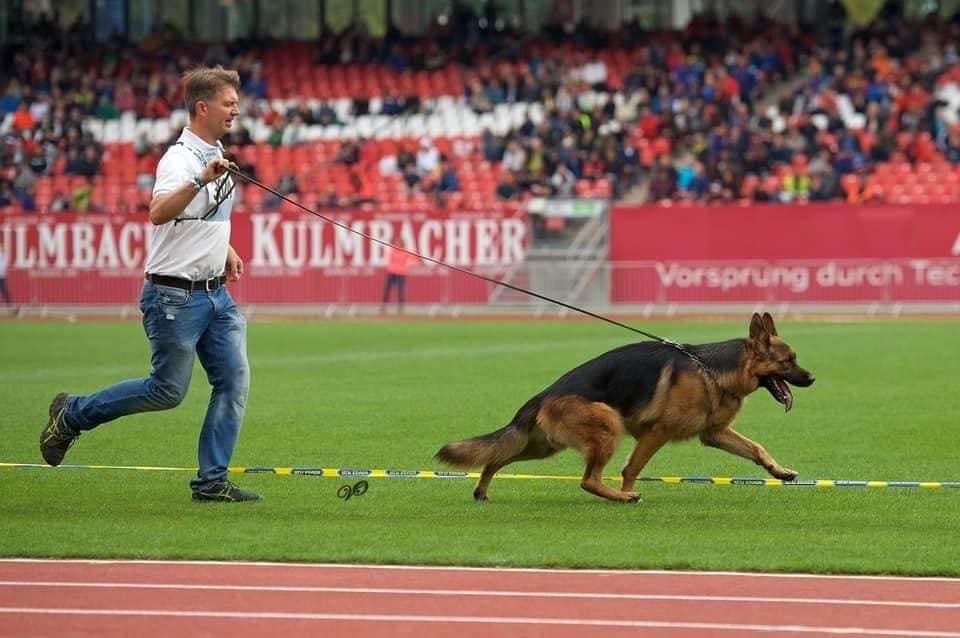 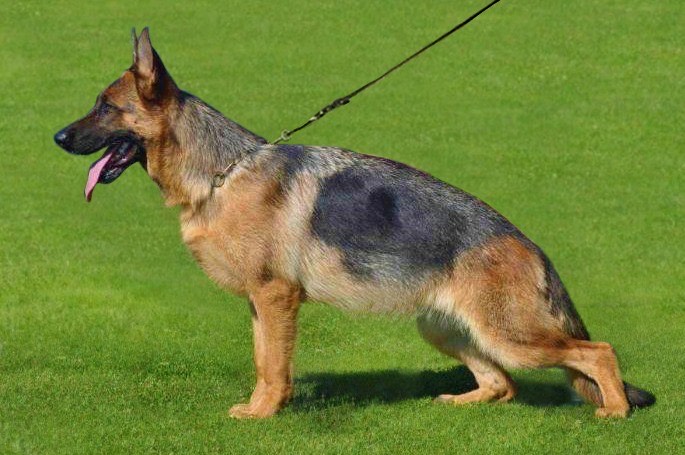 Gala is the daughter of the VA1 Ballack von der Brucknerallee (World champion in 2015 and 2016). Gala was bred and born in Europe, now she is located in our Tx kennel.

Gala is one of biggest females we have, she is around 90 lbs when not pregnant, 61 cm at the shoulder blades. Gala is a gentle giant, but not when she works on the bite sleeve.

She is a great mom and she have been bred in the past to some notorious studs from Germany, very social with visitors and children. She is a great producer of massive males.

Gala is also certified by the OFA (Orthopedic Foundation of Animals) for Degenerative myelopathy for clear genes, she doesn’t carry the disease. 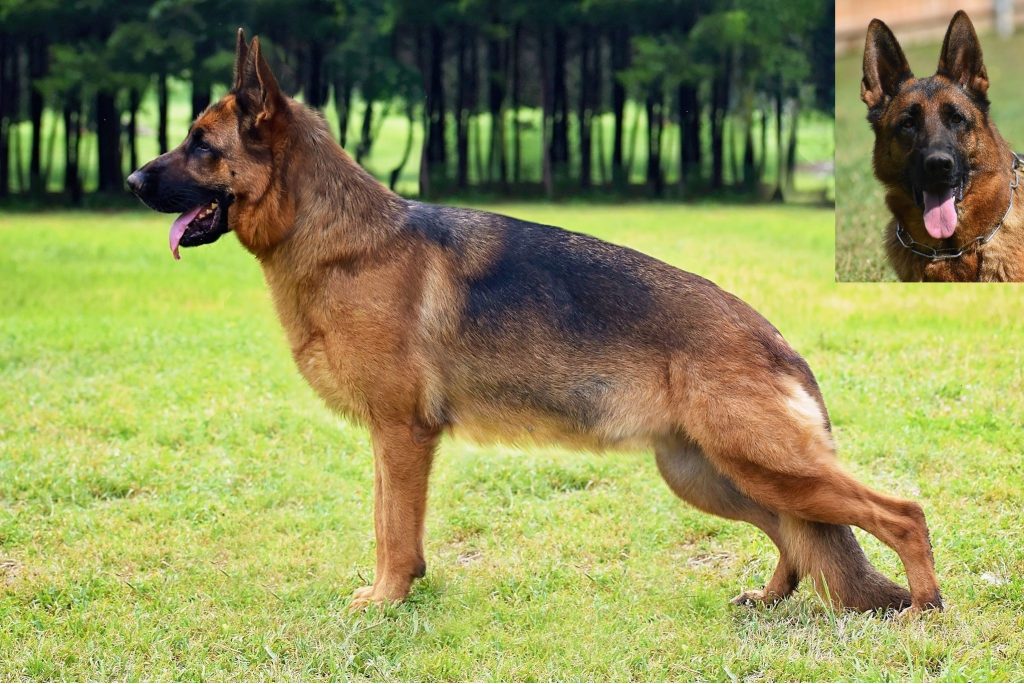 Bella Rose was born in our kennel in Oregon, out of our imported Figo in Regnum Marianum and Oda de Panait Bella is a big female, very fit and slim, out of the GSD standard with 64cm at the shoulder blades.  She has a high drive. very social with everybody, she has a strong character and an amazing temperament. Ready to play and please attitude.

Bella Rose had her hips tested in Germany and rated with NORMAL.
Degenerative myelopathy CLEAR by parentage (Oda and Figo cleared by OFA). 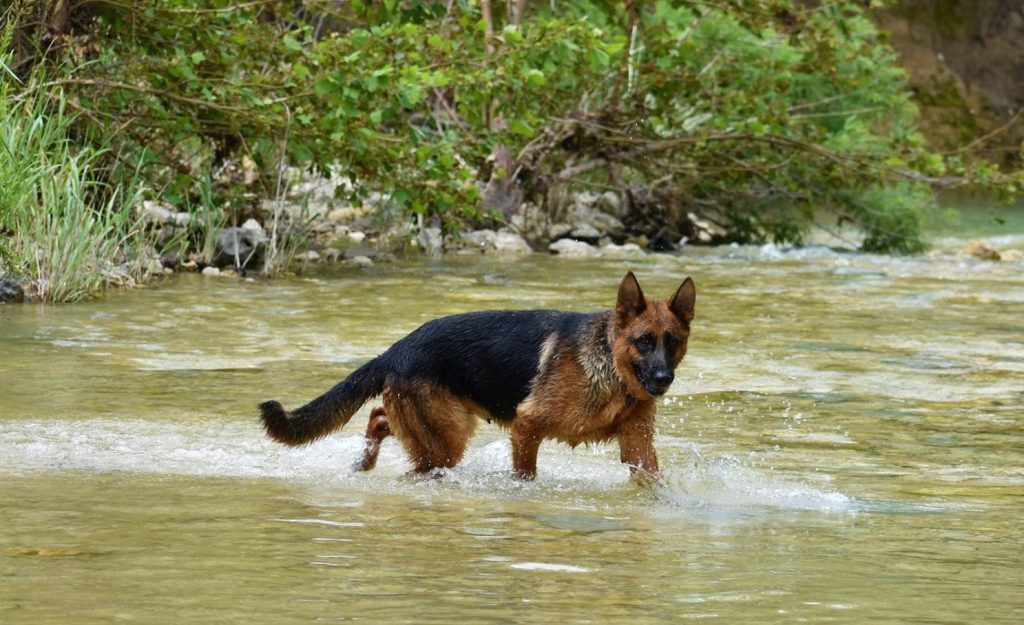 She was imported from Europe in our kennel a few years ago and since then, this female has produced exceptional quality puppies.

Mera is coming out from untitled parents. CLEAR on DM by OFA, Hips and Elbows dysplasia certified in Germany by SV with NORMAL. 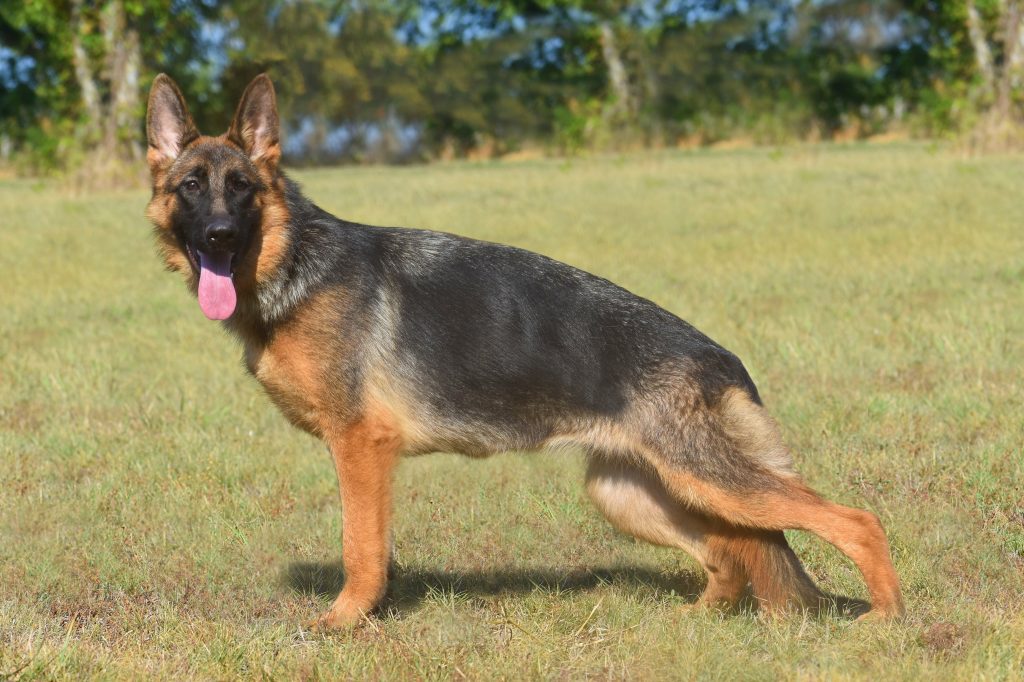 Elsa is a young female out of Odin and Uzzi, bred and born in Europe, Imported tot the USA when she was 5 months old.

She has a very good conformation for show, medium to high drive, very big female for her age, massive bones for a female, 61 cm at the shoulder blades.

Fully titled parents and grandparents IGP/IPO/SchH’s (schutzhund) with Kkl I (recommended to breed) and excellent hips and elbows. Very healthy bloodlines. WORLD CHAMPIONs in her pedigree.

She is also certified by the OFA (Orthopedic Foundation of Animals) for Degenerative myelopathy with CLEAR genes, she doesn’t carry the disease. 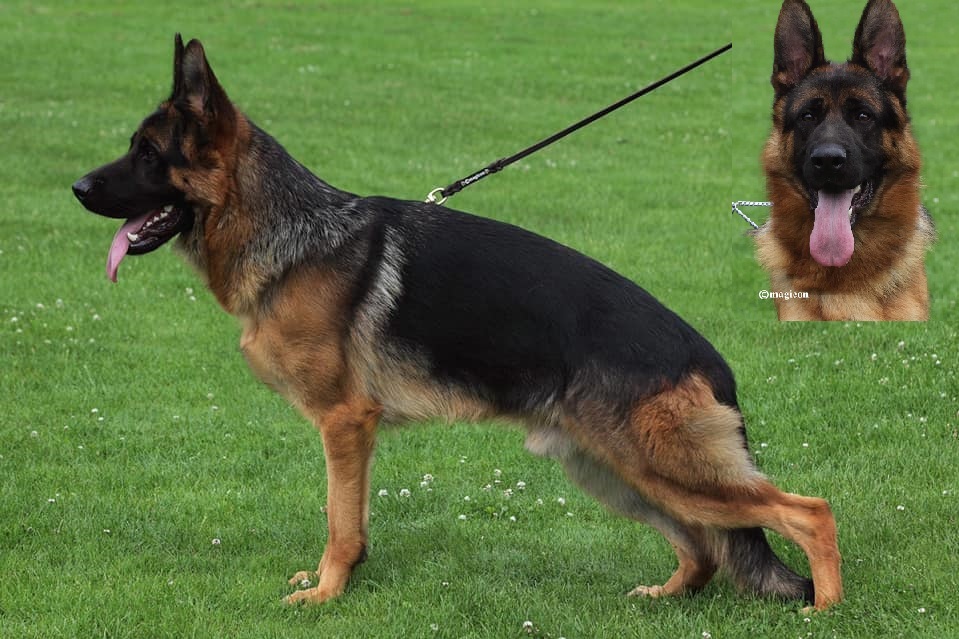 Kirus is an imported Stud, german bred and born. Very large male, around 95-100lbs with 66.5cm at the shoulder blades.

Kirus had his hips and elbows tested and certified in Germany by SV as well as DM tested and cleared.

Kirus is a V rated stud. He is the son of the world champ Kampus vom Drei Birkenzwinger and Kirus had the DNA tested in Germany to prove that. Also when there, he was rated with NORMAL on his elbow and hip dysplasia.

Kirus is one of a kind stud.

Titles
not titled yet 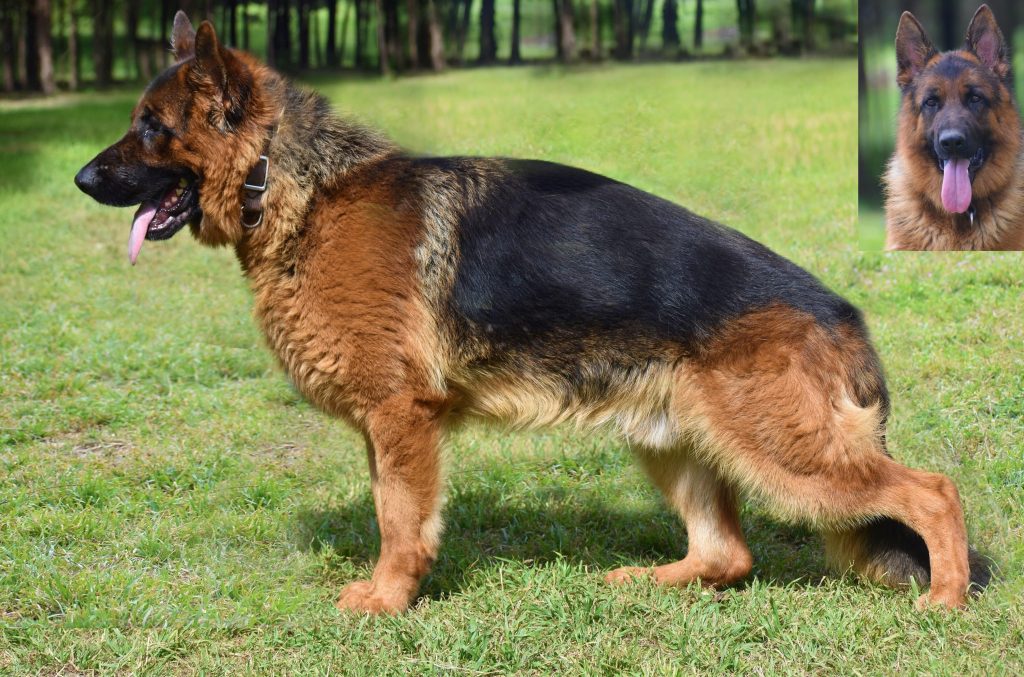 Massive stud, at only 2 years old he weighs 100 lbs, very big boned and big head, black mask, a little over the standard, he is 66,7 cm at the shoulder blades, because of this he will not be showed to any GSD competitions. He has a protective temperament, but in the same time he is a social dog once we travel anywhere.

He is the son of the notorious stud in Italy, VA Thiago von Der Piste Trophe son of the current world champion Willy vom Kuckucksland.

His pedigree/bloodline is top notch, lots of VA rated dogs.

Born in Germany and imported from at 12 months old.

Fully titled parents and grandparents SchH’s/IGP (schutzhund) with Kkl I (recommended to breed) and excellent hips and elbows. Very healthy bloodlines. WORLD CHAMPIONs in his pedigree.

Hips and elbows dysplasia tested and certified in Germany by S.V. with NORMAL, Degenerative myelopathy NORMAL by OFA 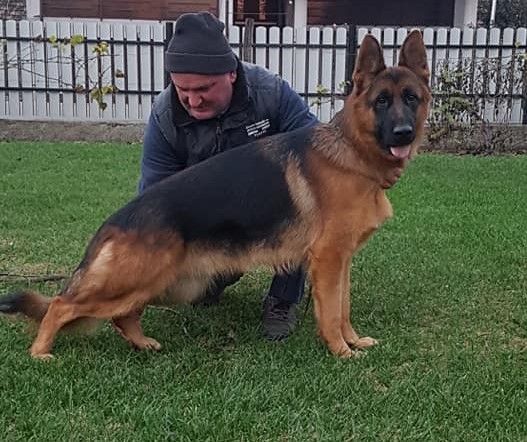 Enzo is an imported Stud, Big and thick boned, 64.5 cm at the shoulder blades. He weighs around 90 lbs.

He achieved SG1 at every competition he was in. He is fully titled and his sire is a notorious stud in Germany, VA11 BSZS 2019 Mars von Aurelius. Also, he has VA Mentos as his grandfather on mother’s side.

DM cleared in Germany as well as his hip and elbows rated with NORMAL by SV.

Enzo is an active stud, medium to high drive. loves to train like he is made to be shown in competitions. Sound temperament, very social and playful with anyone.

PLEASE call/text before planning to visit us! 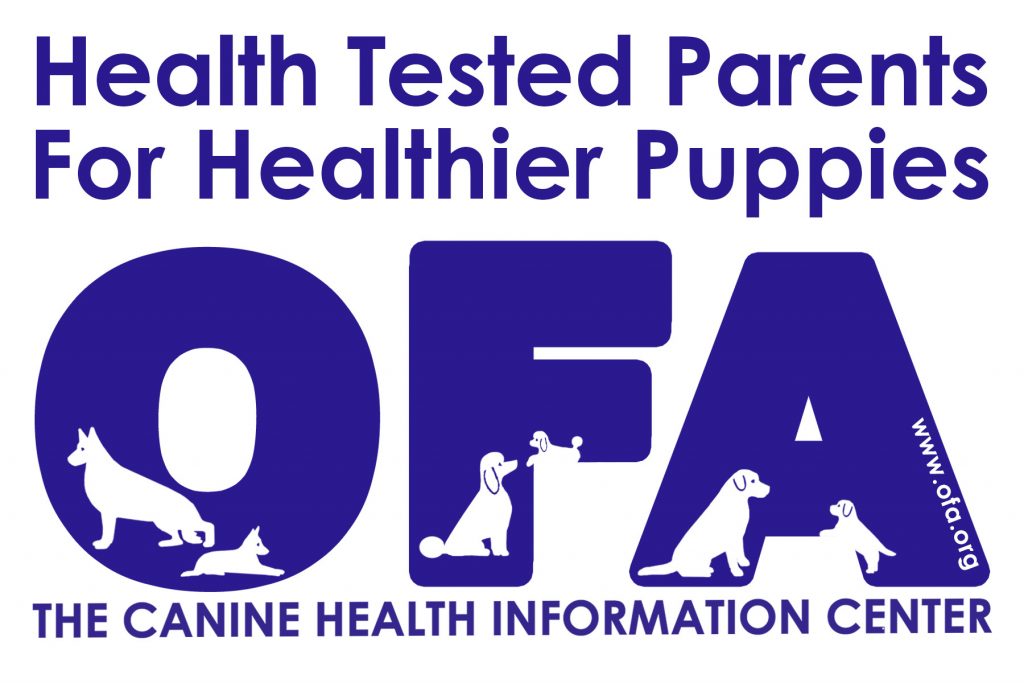